skip to main | skip to sidebar

I've finally bought some expensive @ss rather impressive frog tape. Finally? Yes, finally. And I must say it is worth every half a penny that it cost. Half? Yes, half. I say that b/c I need to stretch every penny I have. I'm such a hustler that I can turn 1 penny into 2. Get out of here right?! You know that's what being broke & jobless does to you. Anywho I am finishing a couple of projects this weekend and have been using my new tape (I know you don't need a picture of it b/c you know what the heck I'm talking about.) not once but twice. 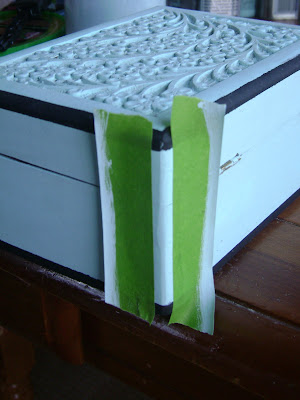 Yes I use the flip side of my tape. Don't you do that too? I mean in this economy isn't everything getting the 2nd go around? (For those of you giving used undies a 2nd go..that's just wrong on so many levels.) I must say though, that line is as crisp as the 1st time the tape was used! 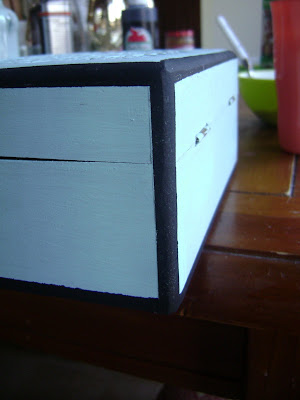 Okay now my cheapness has completely boosted my "I'm Getting Over" ego. So I give it a 3rd go! Yes I did. 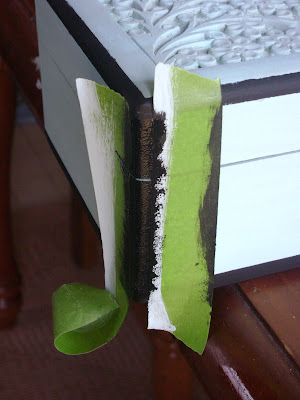 Yeaaaa...pretty freakin fug. Not a good look for a small box, but not bad if it were a huge wall & still a hella better looking than what the blue tape does. 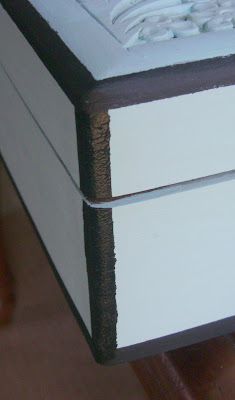 So using the tape twice went FAB..3 times not so much. Have you managed to use yours more than 2 times? Anything else you've used over again? Let me know, I need to save as much $$moo-lah$$ as possible.

Posted by Dreams of Perfection at 1:36 PM

i'm still trying to use up my blue painter's tape, so i don't have any experience with the frog variety. but if i can reuse something (NOT undies) i will.

This post is funny! My husband worked as a professional painter at one time. He did teach me how to cut in without using tape. It's hard and sometimes I still have oops! moments though. I use glass jars that instant cofee and spaghetti sauce comes in. I use grocery store bags as garbage bags, and dog poop bags. I also wash out ziplock bags. I save a lot of garbage crap to use for crafting such as cardboard, ribbon, etc. We've always been broke, so we've learned to live with less. It just becomes second nature to us.

i'm sitting here cracking up at the "nicki minaj voice", 'cause i can really hear it in my head! too funny.

You are so funny! I love your blog!

girl i do the same thing..when i painted my daughters room i ran out of tape. baby i flipped that tape right on over...

That was I call being resourceful! Nothin' wrong with that honey...get your money's worth!

Genius! I never would have thought to do that.

OMG girl! I heard the frog tape was good I am definitely going to try it..i thought i was frugal..two times?..gives me a money saving idea!!

Dreams of Perfection
I love reading blogs and putting their ideas to the test. I figured why not start one of my own where I can show what I've been inspired to do. With Hubby and 2 kids in tow, I have plenty of help to achieve my dreams of a perfect home.